FREE SHIPPING on any watch $99 and over !*
DETAILS
Watches Men's Limited Edition 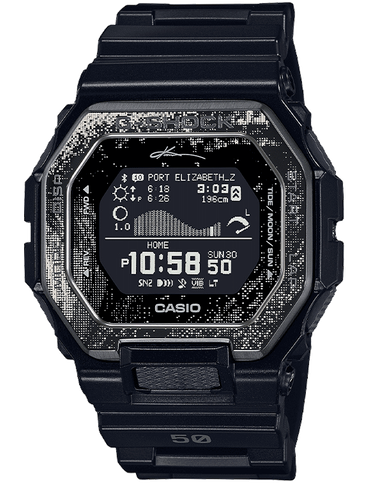 Introducing the second Kanoa Igarashi signature G-SHOCK. Take it to the waves with a special timepiece designed in collaboration with the stellar TEAM G-SHOCK pro surfer.

The digital GBX100KI-1 is all about stealth black. We began with a jet-black base and, at Kanoa’s request, finished the case, band, and LCD all in shades of black.

Featuring a Memory in Pixel (MIP) LCD for the clearest, best visibility yet. Check tide graphs, moon age, high/low tide times and levels, and sunrise/sunset times — all at a glance.

A graphic of Kanoa himself tube-riding a massive wave over the bezel and watch glass adds a final touch of inspiration for the intrepid surfer ready to take to the water.

Born October 1, 1997, in California, USA. Igarashi grew up watching his dad surf every day in Huntington Beach, California. At the age of 3, he was done watching and jumped in the water himself. He was an instant talent and quickly commanded the attention of the surfing community. In 2009, at 11 years old, Igarashi gained National Scholastic Surfing Association (NSSA) fame by claiming a stunning 30 contest wins to set a new record for the most victories in a single season. In 2012, at the age of 14, he became the youngest ever to win the USA Championship Under-18. Four years later, he was the youngest ever, and first Asian, to participate in the World Surf League (WSL) Championship Tour. In 2017, Igarashi won the WSL Vans U.S. Open of Surfing, held in his hometown of Huntington Beach, as he continued to show the world what he could do. In 2019, he was the first Asian to claim victory at the Corona Bali Protected, the third event of the Men’s Championship Tour. In 2021, Igarashi represented Japan in the surfing competition at the Tokyo 2020 Olympic Games, winning a silver medal.

Other Colors
WHERE TO BUY
OUT OF STOCK