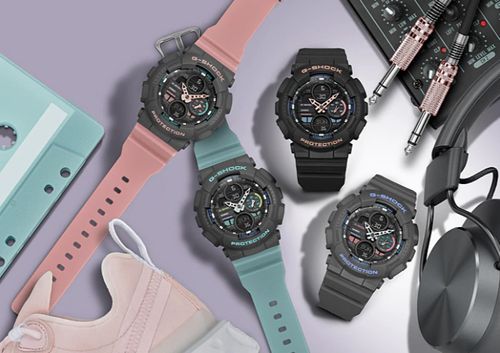 DOVER, N.J., Aug. 21, 2019 – Today, Casio unveiled the all‐new G-SHOCK campaign entitled 24 Hours of Toughness featuring three leading women in different industries who operate outside the boundaries of the typical 9 to 5 working day. The docu‐style series celebrates modern women as exemplars of absolute toughness and kicks off with Emily Oberg, renowned art director and fashion designer. The first of three videos to be released in the campaign provides a look into Emily’s non‐ traditional schedule by following her creative process over the course of 24 hours. Emily is seen sourcing inspiration from her environment around the clock, including a morning hike and shopping at a vintage flea market while equipped with her versatile G-SHOCK. The film coincides with the release of the GMAS140, a new line of S‐Series timepieces designed for the tough and active modern woman. “I’ve always admired G-SHOCK for its marriage of function and style,” said Emily Oberg, founder of Sporty & Rich. “As someone who doesn’t operate within the traditional 9 to 5, I find a lot of inspiration in items that add toughness to fashion to stand the test of time.” u201cTodayu2019s leaders thrive outside the boundaries of the traditional definitions of time,u201d said David Johnson, Vice President of Casio's Timepiece Division. u201cThatu2019s why weu2019re excited to kicku2010off our brand new campaign with Emily Oberg, who embodies our brand ethos of absolute toughness by successfully blazing her own trail everyday.u201d The first video in the series can be watched here: https://bit.ly/GSHOCK24HrsPart1. The new GMAS140 series features a sleek, light on dark designs and is available on time for the fall season in a variety of on‐trend colorways. The watch also features G-SHOCK technology including: GMAS140 models retail for $99 and are available for purchase at select G‐SHOCK retailers including Macy’s, G‐SHOCK Soho Store, and gshock.com. gshock.com. About G-SHOCK
CASIO’s shock-resistant G-SHOCK watch is synonymous with toughness, born from the developer Mr. Ibe’s dream of ‘creating a watch that never breaks’. Over 200 handmade samples were created and tested to destruction until finally in 1983 the first, now iconic G-SHOCK hit the streets of Japan and began to establish itself as ‘the toughest watch of all time’. Each watch encompasses the 7 elements; electric shock resistance, gravity resistance, low temperature resistance, vibration resistance, water resistance, shock resistance and toughness. The watch is packed with Casio innovations and technologies to prevent it from suffering direct shock; this includes internal components protected with urethane and suspended timekeeping modules inside the watch structure. Since its launch, G-SHOCK has continued to evolve, continuing to support on Mr. Ibe’s mantra “never, never give up.” www.gshock.com.
About Casio America, Inc.
Casio America, Inc., Dover, N.J., is the U.S. subsidiary of Casio Computer Co., Ltd., Tokyo, Japan, one of the world’s leading manufacturers of consumer electronics and business equipment solutions. Established in 1957, Casio America, Inc. markets calculators, keyboards, mobile presentation devices, disc title and label printers, watches, cash registers and other consumer electronic products. Casio has strived to realize its corporate creed of “creativity and contribution” through the introduction of innovative and imaginative products. For more information, visit www.casio.com.