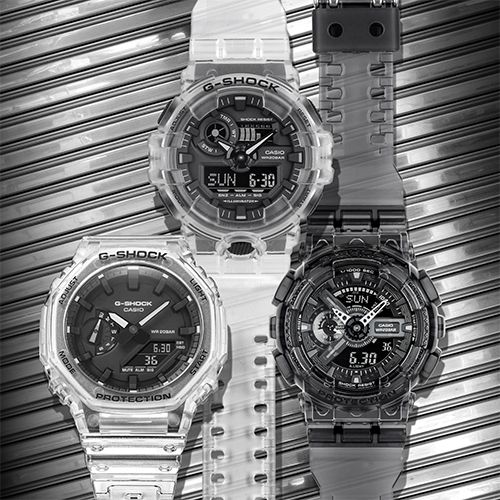 
DOVER, NJ, February 10, 2021— Today, Casio announces a new line-up of men’s G-SHOCK watches with striking semi-transparent bezels and bands. Available in transparent gray and transparent white color schemes, the latest timepieces share the strength and design of G-SHOCK’s most popular base models; the GA2000, GA900, and GA110 for the Transparent Gray series and the DW5600, GA700, and GA2100 for the Transparent White series.
Each timepiece in the new Transparent Pack is built using semi-transparent resin parts, which offers a sleek and eye-catching update to the origin models. In terms of design on the gray series, the GA2000SKE-8A features a tough Carbon Core Guard Case with a Super Illuminator Double LED light, while the GA900SKE-8A features a 7-year battery and the GA110SKE-8A magnetic resistance. All three models come equipped with digital-analog capabilities.
For the Transparent White series, these watches uphold the premium design and technical features found on their base models. The DW5600SKE-7 sports G-SHOCK’s popular square case and EL backlight for enhanced readability, while the GA700SKE-7A features a bold front-button design and GA2100SKE-7A an octagonal bezel. Both feature a Super LED light.
As part of the release, G-SHOCK has unveiled an exclusive landing page taking consumers through the collection, which can be viewed here.
The new models also come equipped with G-SHOCK technology including:
The GA2000SKE-8A, GA900SKE-8A, and GA110SKE-8A each retail for $130, while the DW5600SKE-7, GA2100SKE-7A and GA700SKE-7A each retail for $110. All models will be available for pre-order on Friday, February 12 and for purchase starting on Monday, February 15 at select G-SHOCK retailers, the G-SHOCK Soho Store, and gshock.com.