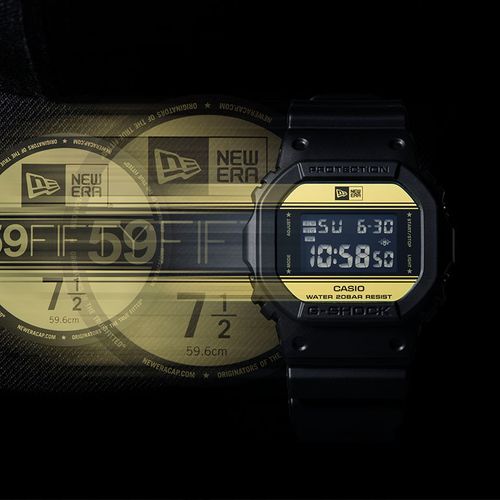 DOVER, NJ, July 23, 2018 - Casio G-SHOCK has once again teamed up with renowned international sports and lifestyle brand, New Era Cap Co. Inc., unveiling an all-new, limited edition DW5600 men’s timepiece. The new model, which is inspired by New Era’s signature cap – the 59FIFTY® Fitted, boasts an understated yet impactful color scheme in classic shades of black and gold.
An updated take on their previous collaborations, the DW5600NE-1 features a gold clasp, alongside gold accents on the face. The base model is the square DW5600, whose shape and dark coloring recalls the look of the original G-SHOCK. The watch also displays the New Era logo on the face and back of the watch. To commemorate this significant collaboration, the watch's collectable packaging has been designed in the form of a New Era cap, featuring G-SHOCKu2019s 35th anniversary logo, which takes place throughout 2018.
"Weu2019re thrilled to be continuing our partnership with New Era," said David Johnson, Vice President of Casio's Timepiece Division. "After seeing the success of our previous collaborations, we're excited to launch the latest model with a brand whose legacy is in line with G-SHOCKu2019s.u201d New Era, a legendary sports brand with a heritage of over 90 years, is best known as the official cap of the NFL and MLB. Combined with G-SHOCK’s absolute toughness, the two’s continued collaboration is a natural fit. To view a video of the collaboration model, visit https://bit.ly/CasioxNewEra.
The new timepiece comes equipped with standard G-SHOCK features including:


The DW5600NE-1 will retail for $150 and will be available for purchase beginning in September 2018 at all standard retailers including Macy’s, the G-SHOCK Soho Store, gshock.com.
About G-SHOCK
CASIO’s shock-resistant G-SHOCK watch is synonymous with toughness, born from the developer Mr. Ibe’s dream of ‘creating a watch that never breaks’. Over 200 handmade samples were created and tested to destruction until finally in 1983 the first, now iconic G-SHOCK hit the streets of Japan and began to establish itself as ‘the toughest watch of all time’. Each watch encompasses the 7 elements; electric shock resistance, gravity resistance, low temperature resistance, vibration resistance, water resistance, shock resistance and toughness. The watch is packed with Casio innovations and technologies to prevent it from suffering direct shock; this includes internal components protected with urethane and suspended timekeeping modules inside the watch structure. Since its launch, G-SHOCK has continued to evolve, continuing to support on Mr. Ibe’s mantra “never, never give up.” www.gshock.com.
About Casio America, Inc.
Casio America, Inc., Dover, N.J., is the U.S. subsidiary of Casio Computer Co., Ltd., Tokyo, Japan, one of the world’s leading manufacturers of consumer electronics and business equipment solutions. Established in 1957, Casio America, Inc. markets calculators, keyboards, mobile presentation devices, disc title and label printers, watches, cash registers and other consumer electronic products. Casio has strived to realize its corporate creed of “creativity and contribution” through the introduction of innovative and imaginative products. For more information, visit www.casio.com.
About New Era
New Era Cap Co. Inc. is an international lifestyle brand with an authentic sports heritage that dates back over 90 years. Best known for being the official on-field cap for Major League Baseball and the National Football League, New Era Cap is the brand of choice not only for its headwear collection, but also for its accessories and apparel lines for men, women and youth. The brand is worn as a symbol of self-expression by athletes, artists and some of the most interesting people around the globe. New Era Cap encourages people to truly express their personal style and individuality through its products. The Company is headquartered in Buffalo, NY and operates facilities in Canada, Europe, Brazil, Japan, and Hong Kong. For more information, visit www.neweracap.com.