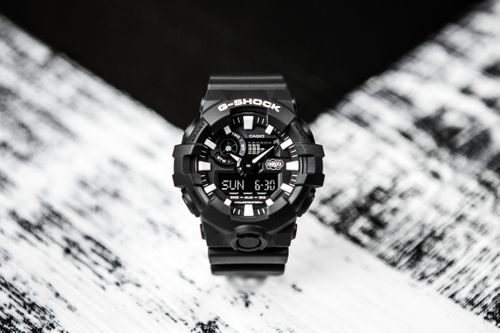 Dover, NJ, September 28, 2017 - Today, in celebration of its forthcoming 35th anniversary, Casio G-SHOCK announces its latest collaboration with legendary artist and designer Eric Haze, this time on a limited-edition men’s GA700 watch. The GA700EH-1A features a brushstroke-inspired black and white color scheme with 2017 printed on the band loop, signature star on the tip of the band and Eric Haze’s logo engraved on the back of the case. The GA700EH-1A marks the seventh union of longtime partners G-SHOCK and Eric Haze on special edition collaborations. Previously Haze, alongside G-SHOCK, crafted limited edition DW6900, G304, DW5600, GA100 and GA110 models, including models in celebration of G-SHOCK’s 25th and 30th anniversaries. Says Eric Haze on the collaboration, “This most recent design represents a style of brush painting I have been developing seriously over the last 5 years. The beauty of the relationship Casio and I have developed for over 20 years now, is that they trust and allow me to follow a new direction for every project, which keeps the work fresh for both myself and the audience. I am very proud of our work together and excited to reveal more ahead at G-SHOCK’s 35th anniversary in November.” The GA700EH-1A features a super illuminator LED light, 3D bold black and white hands, and a five-year battery life. The watch also comes equipped with legendary G-SHOCK technology of 200M water resistance and shock resistance, as well as world time (in 31 time zones, 48 cities + UTC), four daily alarms and one snooze alarm, 1/100th second stopwatch, 1/10th countdown timer, 12/24 hour formats and a hand retract function – all in a 53.4mm case. The GA700EH-1A will retail for $140 beginning October 1st, 2017, and will be available for purchase at G-SHOCK retailers, including select Macy’s, Zumiez, jewelers and fashion & lifestyle apparel retailers, as well as G-SHOCK.com and the G-SHOCK Soho Store. About G-SHOCK
CASIO’s shock-resistant G-SHOCK watch is synonymous with toughness, born from the developer Mr. Ibe’s dream of ‘creating a watch that never breaks’. Over 200 handmade samples were created and tested to destruction until finally in 1983 the first, now iconic G-SHOCK hit the streets of Japan and began to establish itself as ‘the toughest watch of all time’. Each watch encompasses the 7 elements; electric shock resistance, gravity resistance, low temperature resistance, vibration resistance, water resistance, shock resistance and toughness. The watch is packed with Casio innovations and technologies to prevent it from suffering direct shock; this includes internal components protected with urethane and suspended timekeeping modules inside the watch structure. Since its launch, G-SHOCK has continued to evolve, continuing to support on Mr. Ibe’s mantra “never, never give up.” www.gshock.com.
About Casio America, Inc.
Casio America, Inc., Dover, N.J., is the U.S. subsidiary of Casio Computer Co., Ltd., Tokyo, Japan, one of the world’s leading manufacturers of consumer electronics and business equipment solutions. Established in 1957, Casio America, Inc. markets calculators, keyboards, mobile presentation devices, disc title and label printers, watches, cash registers and other consumer electronic products. Casio has strived to realize its corporate creed of “creativity and contribution” through the introduction of innovative and imaginative products. For more information, visit www.casio.com. About Eric Haze
Born in 1961, native New York icon Eric Haze has been making his impact felt in the worlds of art and design for over three decades. As one of the first legitimate street artists to emerge above ground professionally, Eric Haze is widely recognized as one of the original pioneers of hip-hop graphic design, street wear, and artist driven limited edition products. The new millennium has also seen Haze return to his roots as a painter, featuring his fine artwork in a number of exhibitions around the world including New York, Los Angeles, Hong Kong and Paris. Haze currently directs his brand, design and art studios out of their headquarters in Brooklyn NY, where he also lives with his wife, actress Rosie Perez.