G-SHOCK Collaborates With An American Icon, BUDWEISER On Limited-Edition Timepiece 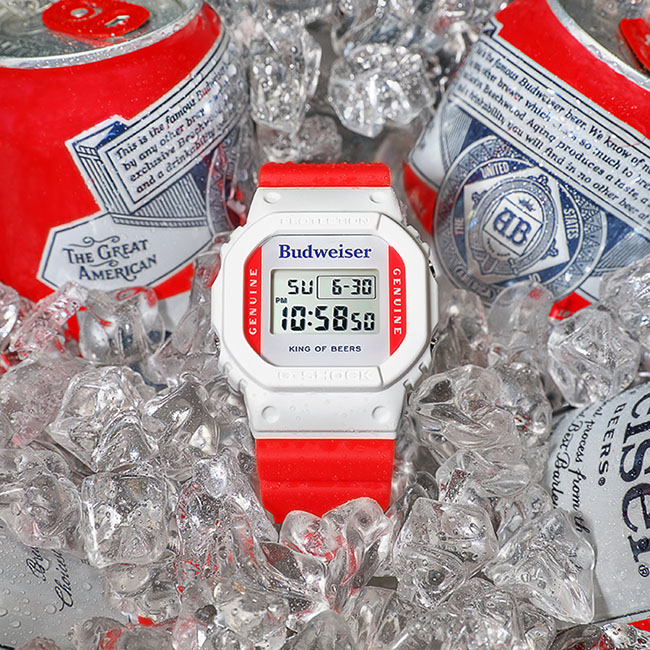 
DOVER, NJ, May 25th, 2021— Today, Casio G-SHOCK announced it teamed up with Anheuser-Busch’s iconic brand, Budweiser, to create an all-new, limited-edition DW5600 timepiece. The DW5600BUD20, which was inspired by and honors the heritage of the two legendary brands, offers a bright red band and white case as well as Budweiser’s logo at the top of the digital display.
The new DW5600 model arrives in G-SHOCK’s classic square shaped case with custom detailing that nods to both brands. Anheuser-Busch’s iconic Eagle emblem is engraved on the watch’s case back, while “Budweiser” is engraved on the band loop and its logo is printed in white across the red band. The EL Backlight features Budweiser’s iconic bowtie logo.
To top off the inaugural partnership, the watch’s collectable packaging has been designed to honor Budweiser’s notable label and comes in a custom replica 25 ounce tall can, as well as a custom box that emulates a case of Budweiser beer.
The updated DW5600 model also boasts staple G-SHOCK functions and capabilities such as a Flash Alert and one-of-a-kind EL backlight to make the digital display easy-to-read at any time of day.
In addition to the introduction of this limited-edition timepiece, G-SHOCK has unveiled an exclusive video and landing page which can be viewed HERE.
The new timepiece is equipped with G-SHOCK technology including:
The DW5600BUD20, will retail for $200 and will be available for purchase exclusively at Bodega on May 26th, and at select U.S. G-SHOCK retailers, the G-SHOCK Soho Store, and gshock.com on May 27st.
This product is intended for purchase by persons of legal alcohol purchase and drinking age.