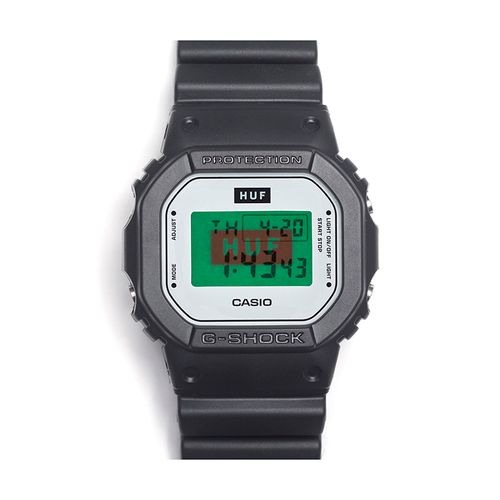 Dover, NJ, July 11, 2017 - Today, Casio G-SHOCK announces the release of a special edition DW5600 model in collaboration with skate lifestyle brand, HUF Worldwide. Commemorating the brand’s 15th anniversary, the DW5600HUF-1 features the classic style of the DW5600 merged with various design elements that nod to HUF’s celebrated ‘Dirt Bag Crew’ culture, including its signature logo, a throwback graphic, and more. Marking the 2nd collaboration between G-SHOCK and HUF, the DW5600HUF-1 celebrates this HUF milestone by also highlighting each year of the brand’s 15 years on the band, as well as, “Hours Unaccounted For” written directly underneath the band, an acronym play on HUF representing inexplicable times passed. The signature HUF bar logo lights up at the touch of a button on the watch’s face, while a throwback graphic character known as the 15-armed Party Puss appears on the back case alongside a ‘15 Beers Strong’ tagline. Each watch will also be encased in special packaging that resembles the brand’s signature shoeboxes. Additionally, the DW5600HUF-1 comes equipped with G-SHOCK’s legendary technology of 200M water resistance and shock resistance. Other features include an EL backlight with afterglow, 1/100th second stopwatch and countdown timer, one daily alarm, a full auto-calendar and 12/24 hour formats – all in a 42.80 mm case. A teaser video has been created to reflect HUF’s brand DNA and showcase the design behind the watch: https://bit.ly/DW5600HUF-1 The DW5600HUF-1 will retail for $120 beginning this Friday, July 14, and will be available at select retailers including all HUF stores and HUF online, GSHOCK.com, the G-SHOCK Soho Store. and Zumiez. About G-SHOCK
CASIO’s shock-resistant G-SHOCK watch is synonymous with toughness, born from the developer Mr. Ibe’s dream of ‘creating a watch that never breaks’. Over 200 handmade samples were created and tested to destruction until finally in 1983 the first, now iconic G-SHOCK hit the streets of Japan and began to establish itself as ‘the toughest watch of all time’. Each watch encompasses the 7 elements; electric shock resistance, gravity resistance, low temperature resistance, vibration resistance, water resistance, shock resistance and toughness. The watch is packed with Casio innovations and technologies to prevent it from suffering direct shock; this includes internal components protected with urethane and suspended timekeeping modules inside the watch structure. Since its launch, G-SHOCK has continued to evolve, continuing to support on Mr. Ibe’s mantra “never, never give up.” www.gshock.com.
About Casio America, Inc.
Casio America, Inc., Dover, N.J., is the U.S. subsidiary of Casio Computer Co., Ltd., Tokyo, Japan, one of the world’s leading manufacturers of consumer electronics and business equipment solutions. Established in 1957, Casio America, Inc. markets calculators, keyboards, mobile presentation devices, disc title and label printers, watches, cash registers and other consumer electronic products. Casio has strived to realize its corporate creed of “creativity and contribution” through the introduction of innovative and imaginative products. For more information, visit www.casio.com. About HUF Worldwide
Founded in 2002 by professional skateboarder Keith Hufnagel, HUF is a Los Angeles based manufacturer of premium footwear and apparel designed for contemporary skate and lifestyle. Inspired by Keith’s unique experiences traveling the globe as a skateboarder—and represented by a world-renowned skate team & group of ambassadors—the clean, classic brand aesthetic of HUF embodies a diverse array of cultural inspirations and ideas. What started as a small boutique on an offbeat block of San Francisco’s Tenderloin District has now become one of the most recognized pioneering skateboard and lifestyle brands worldwide. Made by skateboarders, for skateboarders, HUF represents not only a more refined and forward-thinking skateboard brand, but also any individual inspired by the vast array of countercultures that parallel skateboard mentality. www.hufworldwide.com