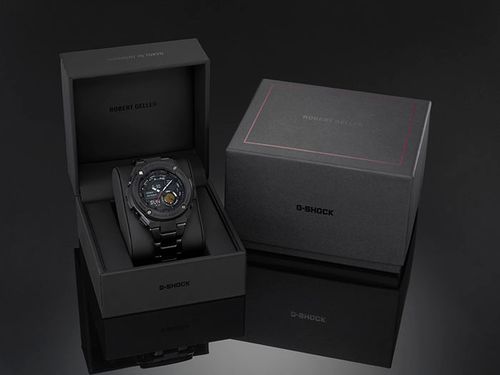 Dover, NJ, June 28, 2017 - Today, Casio G-SHOCK and acclaimed menswear designer, Robert Geller, announce their partnership on a new, limited edition men’s G-STEEL timepiece – the GST200RBG-1. The first ever collaboration for the G-STEEL line, this model is inspired by the urban elements in Tokyo – drawing from both brands’ history and Geller’s experiences within the city. The new G-STEEL is the first joint design between G-SHOCK and Geller, who have previously partnered on five consecutive runway presentations at New York Fashion Week: Men’s. “I have been working with G-SHOCK for several years, and was very pleased when we decided to create a watch together. I wore a G-SHOCK watch throughout my teenage years, so it is really exciting to be able to make my own, more grown up version,” said Robert Geller. “For the past ten years, I have been producing my ready to wear collection in Japan because I love the quality and care of Japanese craftsmanship. G-SHOCK shares this same love, which is why this collaboration is a natural fit for us.” Specially designed by Robert Geller himself, the GST200RBG-1 features a black ion plated stainless steel metal band, case and buttons, with gold accents on the face and a dark fuchsia second hand that nods to his most recent collection. Together the elements evoke an image of the Tokyo city lights against the buildings at night. “My favorite time in Tokyo is walking through the city in the middle of the night, when it is impossible to sleep because of the jet lag,” said Geller. “The lights, smells and sounds are really magical and I wanted this watch to reflect that magic." Part of the G-STEEL line, which is geared towards the active gentleman with a refined personal style, this particular model includes G-SHOCK’s layered guard structure to absorb maximum impact while maintaining the sleek look of metal. In addition, the watch comes equipped with G-SHOCK’s legendary structure of shock resistance and 200M water resistance. Other technologies include an auto super illuminator LED light, neo-brite luminous hands, world time (31 time zones + UTC), five daily alarms, 1/100th second stopwatch and countdown timer and 12/24 hour formats – all in a 52.4mm case. For the launch of the new G-SHOCK x Robert Geller timepiece, a video was created to showcase the versatility of the watch. Take a look here:https://bit.ly/GSHOCKxRobertGeller The GST200RBG-1 will retail for $420 beginning in July and will be available for purchase at select Macy’s, select Jewelers, select Fashion Apparel, G-SHOCK.com and the G-SHOCK Soho Store. About G-SHOCK
CASIO’s shock-resistant G-SHOCK watch is synonymous with toughness, born from the developer Mr. Ibe’s dream of ‘creating a watch that never breaks’. Over 200 handmade samples were created and tested to destruction until finally in 1983 the first, now iconic G-SHOCK hit the streets of Japan and began to establish itself as ‘the toughest watch of all time’. Each watch encompasses the 7 elements; electric shock resistance, gravity resistance, low temperature resistance, vibration resistance, water resistance, shock resistance and toughness. The watch is packed with Casio innovations and technologies to prevent it from suffering direct shock; this includes internal components protected with urethane and suspended timekeeping modules inside the watch structure. Since its launch, G-SHOCK has continued to evolve, continuing to support on Mr. Ibe’s mantra “never, never give up.” www.gshock.com.
About Casio America, Inc.
Casio America, Inc., Dover, N.J., is the U.S. subsidiary of Casio Computer Co., Ltd., Tokyo, Japan, one of the world’s leading manufacturers of consumer electronics and business equipment solutions. Established in 1957, Casio America, Inc. markets calculators, keyboards, mobile presentation devices, disc title and label printers, watches, cash registers and other consumer electronic products. Casio has strived to realize its corporate creed of “creativity and contribution” through the introduction of innovative and imaginative products. For more information, visit www.casio.com. About Robert Geller
Robert Geller is a celebrated menswear fashion designer who has garnered a cult following, especially for his Robert Geller Second label, a cut and sew collection designed to be an elegant interpretation of classic athletic wear. He launched his career at Marc Jacobs in 2001 upon graduating from RISD. He then joined forces with patternmaker Alexandre Plokhov to revamp the New York based brand, Cloak. Cloak gained acclaim and won a prestigious grant from the Vogue/CFDA fashion fund in 2004. In 2007, Geller launched his eponymous brand, which secured several prestigious awards including the CFDA's "Swarovski Award for Menswear" in June 2011 and his most recent nomination for the most coveted CFDA Menswear Designer of the year award. Geller also launched a denim collection in 2015, and continues to collaborate with interesting brands each season.