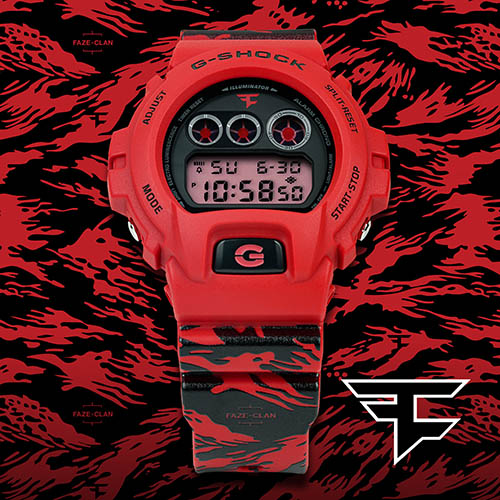 
DOVER, NJ, November 24, 2020 — Today, Casio G-SHOCK pays homage to one of the world’s most prominent and influential gaming organizations, FaZe Clan, with a custom DW6900 timepiece. The limited-edition collaborative timepiece is cloaked in FaZe Clan’s signature red tiger camo print paying homage to the early days of FaZe Clan when members would have red tiger camo skins on their in-game sniper rifles. The case back features an engraving commemorating FaZe Clan’s 10-year anniversary this year.
The new DW6900FAZE20-4CR model also comes with customized packaging in a sleek, red tin and box featuring FaZe Clan’s red tiger camo and boasting the FaZe Clan logo.
"G-SHOCK is a brand that all of us grew up on," says FaZe Clan's VP of Marketing Taav Cooperman. "We loved the idea of bringing it into our world and creating something tangible with this special collaboration, giving some of our gaming culture to the iconic brand we love so much."
This collaboration comes on the heels of several successful partnerships that FaZe Clan has teamed up on in the past year, working with brands like Anti Social Social Club, The National Football League and Beats by Dre.
The limited-edition DW6900 timepiece boasts the brand’s iconic triple-graph face design and staple functions such as a Flash Alert and one-of-a-kind EL backlight that displays “FAZE UP” within the digital display when lit.
The DW6900FAZE20-4CR also comes equipped with G-SHOCK technology including:
The DW6900FAZE20-4CR will retail for $150 and be available for purchase starting November 27, 2020 at the G-SHOCK Soho Store, fazeclan.com, and gshock.com.

About G-SHOCK
CASIO’s shock-resistant G-SHOCK watch is synonymous with toughness, born from the developer Mr. Ibe’s dream of ‘creating a watch that never breaks’. Over 200 handmade samples were created and tested to destruction until finally in 1983 the first, now iconic G-SHOCK hit the streets of Japan and began to establish itself as ‘the toughest watch of all time’. Each watch encompasses the 7 elements; electric shock resistance, gravity resistance, low temperature resistance, vibration resistance, water resistance, shock resistance and toughness. The watch is packed with Casio innovations and technologies to prevent it from suffering direct shock; this includes internal components protected with urethane and suspended timekeeping modules inside the watch structure. Since its launch, G-SHOCK has continued to evolve, continuing to support on Mr. Ibe’s mantra “never, never give up.” www.gshock.com.
About Casio America, Inc.
Casio America, Inc., Dover, N.J., is the U.S. subsidiary of Casio Computer Co., Ltd., Tokyo, Japan, one of the world’s leading manufacturers of consumer electronics and business equipment solutions. Established in 1957, Casio America, Inc. markets calculators, keyboards, mobile presentation devices, disc title and label printers, watches, cash registers and other consumer electronic products. Casio has strived to realize its corporate creed of “creativity and contribution” through the introduction of innovative and imaginative products. For more information, visit www.casio.com.
About FaZe Clan
Since its inception in 2010, FaZe Clan has established itself as the world’s most prominent and influential gaming organization known for its disruptive original content and hyper-engaged global fanbase of 230 million combined across all social platforms. FaZe Clan holds an unrivalled position at the epicenter of gaming, sports, culture and entertainment, driving how the next generation consumes content, plays and shops. Their roster of 85 influential personalities consists of world-class gamers, engaging content creators and a mix of talent beyond the world of gaming, including NBA star Ben Simmons, LeBron “Bronny” James Jr. and Lil Yachty. The organization’s unmatched esports division includes eight competitive teams in Fortnite, FIFA, PUBG, PUBG Mobile, Rainbow Six, Call of Duty League (Atlanta FaZe), CS:GO and VALORANT with dozens of world championship trophies among them. In addition, FaZe Clan has become a sought-after fashion and lifestyle brand through an inspired apparel line and limited-edition collaborations with partners including Champion, NFL, Manchester City FC, Lyrical Lemonade, Kappa, CLOT, LA Kings, and more. Follow us @FaZeClan, @FaZeApparel and @FaZeUpdate.