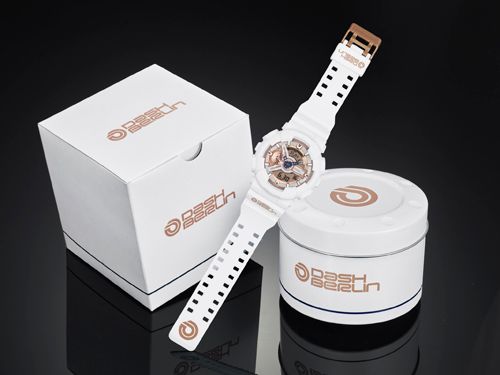 DOVER, NJ, March 30, 2017 -Today, Casio G-SHOCK announces a new collaboration with internationally recognized electronic dance music DJ, Dash Berlin. Dash personally designed the GA110DB-7A timepiece to feature a white case and band, mirroring the blank canvas of life waiting to be written upon, along with accents of rose gold on the face and band to represent luxury and quality. The watch also features the official Dash Berlin logo on the band and band loop, case back engraving and limited edition packaging. As a lifelong G-SHOCK fan, Dash was actively involved in the design process. “Teaming up with Casio to design my very own G-SHOCK watch was a dream come true,” said Dash Berlin. “The collaboration watch is simply the best of both worlds -- vision and technology. It’s a future classic!” A natural partner for G-SHOCK, Dash Berlin is known for his charismatic stage presence and high-energy performances. With an active lifestyle and background in professional soccer, he demonstrates the brand’s core value of absolute toughness. He is also an avid watch collector and longtime fan of G-SHOCK, having worn various models in music videos and at performances throughout his career. The exclusive GA110DB-7A model features a large face design and standard G-SHOCK technology of shock resistance and 200M water resistance. The timepiece also comes equipped with magnetic resistance, an auto LED light, world time (29 time zones, 48 cities + UTC), five daily alarms and one snooze alarm, 1/1000th second stopwatch, a speed indicator, countdown timer and mute function – all in a 51.2mm case. The GA110DB-7A will retail for $150 beginning in April 2017, and will be available for purchase at gshock.com, select Macy’s, and the G-SHOCK Soho Store. About G-SHOCK
CASIO’s shock-resistant G-SHOCK watch is synonymous with toughness, born from the developer Mr. Ibe’s dream of ‘creating a watch that never breaks’. Over 200 handmade samples were created and tested to destruction until finally in 1983 the first, now iconic G-SHOCK hit the streets of Japan and began to establish itself as ‘the toughest watch of all time’. Each watch encompasses the 7 elements; electric shock resistance, gravity resistance, low temperature resistance, vibration resistance, water resistance, shock resistance and toughness. The watch is packed with Casio innovations and technologies to prevent it from suffering direct shock; this includes internal components protected with urethane and suspended timekeeping modules inside the watch structure. Since its launch, G-SHOCK has continued to evolve, continuing to support on Mr. Ibe’s mantra “never, never give up.” www.gshock.com.
About Casio America, Inc.
Casio America, Inc., Dover, N.J., is the U.S. subsidiary of Casio Computer Co., Ltd., Tokyo, Japan, one of the world’s leading manufacturers of consumer electronics and business equipment solutions. Established in 1957, Casio America, Inc. markets calculators, keyboards, mobile presentation devices, disc title and label printers, watches, cash registers and other consumer electronic products. Casio has strived to realize its corporate creed of “creativity and contribution” through the introduction of innovative and imaginative products. For more information, visit www.casio.com. About Dash Berlin
Dash Berlin is an award-winning Dutch DJ and musician who’s real name is Jeffrey Sutorius, he is the 7th most popular DJ in the world according to DJ Mag in 2012 and a holds a global Top 20 position for seven years in a row. About EDM
Electronic dance music (also known as EDM, dance music, club music, or simply dance) is a broad range of percussive electronic music genres made largely for nightclubs, raves, and festivals. EDM is generally produced for playback by disc jockeys (DJs) who create seamless selections of tracks, called a mix, by segueing from one recording to another. In the United Kingdom and in continental Europe, EDM is more commonly called 'dance music' or simply 'dance'.