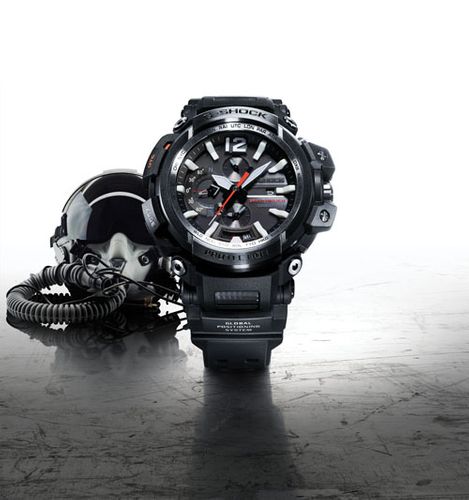 DOVER, NJ, May 19, 2017 -Casio G-SHOCK announces the availability of the GRAVITYMASTER GPW2000-1A, the first-ever Bluetooth connected model in the Master of G series that was unveiled at Baselworld in March 2017. The model, which is available for purchase now, was built specifically for aviation experts, featuring connected GPS capabilities, including Mission Stamp – an innovative function that records time and location, while transmitting the information via Bluetooth to a dedicated G-SHOCK mobile app that features a detailed flight log. The GPW2000-1A is the first GRAVITYMASTER model to contain a longitude and latitude indicator, adding a key function to record travel location and in conjunction with the app, a history for pilots carrying out their missions. The watch utilizes a 3-Way Time Sync: the GPW-2000 retains the GPS/Multi-Band 6 timekeeping feature and can also sync through time servers on the internet by automatically connecting to a smartphone. Its Bluetooth capability allows the watch to link to the new G-Shock Connected smartphone app for automatic time adjustment, world time setting and the flight log GPS mapping function. Other premium features include a sapphire crystal, carbon reinforced connection structure, as well as Triple G Resist technology. The GPW-2000-1A also comes equipped with G-SHOCK's legendary 200M water resistance, shock resistance, and magnetic resistance, in addition to a Super Illuminator (high-brightness LED light), direct UTC display, a daily alarm, and 24-hour stopwatch and countdown timer – all in a 57.1mm case. As the first timepiece compatible with the new G-SHOCK Connected App, the newly-released GRAVITYMASTER pairs with the app to reflect an accurate time-keeping system and flight log, providing a detailed graph of the user’s movement history, as well as the ability to log and store previous travels. The app, which is available for download now on iPhone and Android devices, can be activated with the watch through a Bluetooth connection on any smartphone. To commemorate the release of the new GRAVITYMASTER, a video was created to highlight the various functions of the watch, which you can view here: [https://bit.ly/GPW20001A] The new GPW2000-1A retails for $800 and is available for purchase at selected Jeweler, G-SHOCK Soho and gshock.com. About G-SHOCK
CASIO’s shock-resistant G-SHOCK watch is synonymous with toughness, born from the developer Mr. Ibe’s dream of ‘creating a watch that never breaks’. Over 200 handmade samples were created and tested to destruction until finally in 1983 the first, now iconic G-SHOCK hit the streets of Japan and began to establish itself as ‘the toughest watch of all time’. Each watch encompasses the 7 elements; electric shock resistance, gravity resistance, low temperature resistance, vibration resistance, water resistance, shock resistance and toughness. The watch is packed with Casio innovations and technologies to prevent it from suffering direct shock; this includes internal components protected with urethane and suspended timekeeping modules inside the watch structure. Since its launch, G-SHOCK has continued to evolve, continuing to support on Mr. Ibe’s mantra “never, never give up.” www.gshock.com.
About Casio America, Inc.
Casio America, Inc., Dover, N.J., is the U.S. subsidiary of Casio Computer Co., Ltd., Tokyo, Japan, one of the world’s leading manufacturers of consumer electronics and business equipment solutions. Established in 1957, Casio America, Inc. markets calculators, keyboards, mobile presentation devices, disc title and label printers, watches, cash registers and other consumer electronic products. Casio has strived to realize its corporate creed of “creativity and contribution” through the introduction of innovative and imaginative products. For more information, visit www.casio.com.