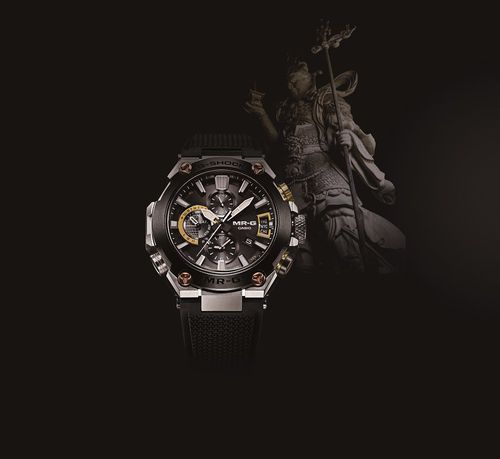 DOVER, NEW JERSEY, OCTOBER 18, 2018 - Today, Casio G-SHOCK the latest addition to the upscale men’s MR-G line with the all new MRG-G2000R-1A timepiece. The first-ever MR-G model to feature a Dura Soft Fluoro-rubber Band, the watch combines highly durable material with soft textures for a supremely comfortable wear. Part of the brand’s flagship timepiece collection, the new MR-G model is created to be the epitome of luxury and strength with the traditional Japanese Bishamon-kiko Pattern engraved on the band.
This customary Japanese finish, which combines hexagonal shapes into groups of three, dates back to ancient times and was often seen on the armor of Bishamonten – a group of warriors that symbolized ultimate strength in battle.
Including premium features such as a diamond-like carbon coating to increase abrasion resistance, as well as titanium that’s undergone a deep layer hardening process to render it up to five times tougher than normal, the MRG-G2000R combines Japanese aesthetics with modern technology for a luxurious, tough watch.
Other top-of-the-line finishes include a scratch-resistant sapphire inner crystal coating, G-SHOCK’s legendary Multi-Band 6 technology and tough solar technology, as well as Bluetooth connectivity through the G-SHOCK Connected app. In another first for the brand, the Dura Soft Fluoro-Rubber Band and titanium case are connected via “L/R-Δ Loc” (pronounced “L-R Delta Lock”), which Casio co-developed in partnership with NejiLaw – a company known for “screws that never come loose.” Based on an L/R bolt* with two nuts that lock together and spin in opposite directions, L/R-Δ Loc was created specifically for watches as a revolutionary mechanism that prevents screws from coming loose due to vibration and other forces. *L/R is a registered trademark of NejiLaw Inc. Each timepiece also comes equipped with standard G-SHOCK technology of:


The MRGG2000R-1A will retail for $2,800 and will be available for purchase starting this November at selected G-SHOCK retailers including Macy’s, G-SHOCK Soho Store, and gshock.com. About G-SHOCK
CASIO’s shock-resistant G-SHOCK watch is synonymous with toughness, born from the developer Mr. Ibe’s dream of ‘creating a watch that never breaks’. Over 200 handmade samples were created and tested to destruction until finally in 1983 the first, now iconic G-SHOCK hit the streets of Japan and began to establish itself as ‘the toughest watch of all time’. Each watch encompasses the 7 elements; electric shock resistance, gravity resistance, low temperature resistance, vibration resistance, water resistance, shock resistance and toughness. The watch is packed with Casio innovations and technologies to prevent it from suffering direct shock; this includes internal components protected with urethane and suspended timekeeping modules inside the watch structure. Since its launch, G-SHOCK has continued to evolve, continuing to support on Mr. Ibe’s mantra “never, never give up.” www.gshock.com.
About Casio America, Inc.
Casio America, Inc., Dover, N.J., is the U.S. subsidiary of Casio Computer Co., Ltd., Tokyo, Japan, one of the world’s leading manufacturers of consumer electronics and business equipment solutions. Established in 1957, Casio America, Inc. markets calculators, keyboards, mobile presentation devices, disc title and label printers, watches, cash registers and other consumer electronic products. Casio has strived to realize its corporate creed of “creativity and contribution” through the introduction of innovative and imaginative products. For more information, visit www.casio.com.